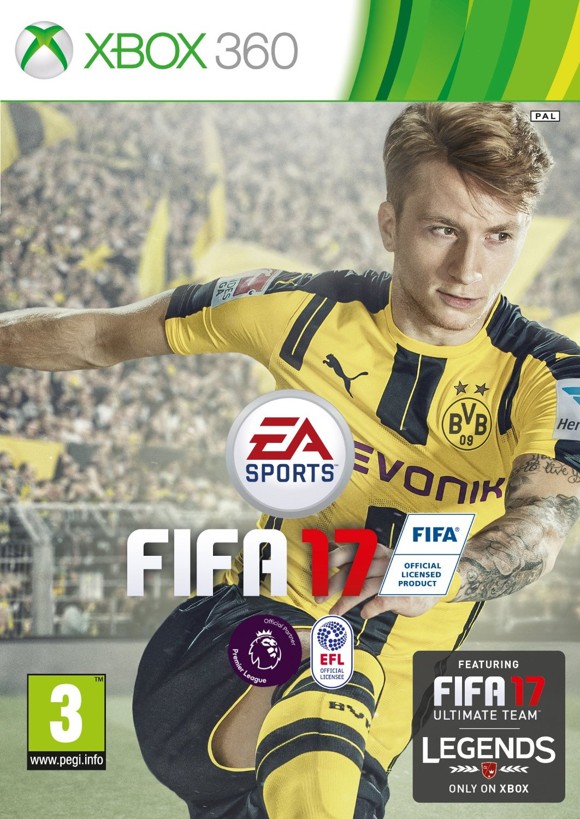 by EA
Part of these campaigns:
Edition
Region
Platform
Career Mode: FIFA 17 adds depth to your experience with new features that give you even greater control over your club's season, the option to compete in new leagues, and many other key changes.Pre-season Tournaments: Prior to a given season, your club w…
Read more

Career Mode: FIFA 17 adds depth to your experience with new features that give you even greater control over your club's season, the option to compete in new leagues, and many other key changes.

New Leagues: The Japan J1 League is joining the list of leagues in which you'll be able to compete in FIFA 17's Career Mode.

Offline Play a Friend: There are more ways to compete against your friends in FUT 17. For the first time ever, your opponent can download their FUT squad to use in a local offline match. * The couch bragging rights are at stake in FUT 17!

New Attacking Techniques: New options in attack give players more ways to create chances and finish in front of goal.

Set Piece Rewrite: From free kicks to penalties to corner kicks, inject personality and variety from every dead ball situation

What is FIFA Ultimate Team (FUT)?


EA SPORTS FIFA 17 Ultimate Team is a massive online community of fans building, managing, and competing with their ultimate football team from the world's best players in FIFA 17. Join over 15 million fans and take on the challenge of building football squads of the world's best players by earning, buying, selling, and trading players with the Ultimate Team community. Play with your dream team and put them against your friends' teams whenever you want. Create and manage multiple squads and take them into competition in online and solo single-player tournaments, all dynamically updated each week.

What is a FIFA Ultimate Team Loan Player?

Ever wonder what it's like to have a top footballer on your team? You'll be able to try out some of FIFA Ultimate Team's most sought after players for a limited amount of matches.

What is a FIFA Ultimate Team Draft?

FUT Draft is a new way to play FIFA Ultimate Team! Draft a squad and challenge opponents in a tournament to win coins, packs, and more. Test your team building skills and pick the best player for each position from a five player draw. Make key choices based on player quality or team Chemistry. Earn bigger match prizes as you progress – win all four games in a row to earn the best rewards!

What is the EA SPORTS Football Club (EASFC)?

Experience football's social network. Earn rewards, level up, enjoy live Challenges, and connect with friends. Everything within FIFA 17 is measured and communicated through EA SPORTS Football Club. Fans can earn rewards to unlock items from the Football Club Catalogue, and build their status as they climb 100 levels. Real-world storylines drive EA SPORTS Football Club through regular challenges so that FIFA 17 will look, feel and play like the real-world season.